Intro­duction to the “Dalālat al-ḥā’irīn” or Guide for the Perplexed
Issue 01 — Fall 2019 — Session 02 — Micro­lit­er­a­tures: In the Margins of the Law
By Jesús R. Velasco | Published on September 11, 2019
Moshé ben Maimon, better known as Maimonides, also called by his acronym RaMbaM (Rabbi Moshé ben Maimon) started writing his "Dalālat al-ḥā’irīn" or "Guide for the perplexed" for his pupil, Josef ben Judah, who had left Fustat for Aleppo, in 1190. Maimonides wrote his work in Classical Arabic, in Hebrew script (Judeo-Arabic). He composed the work in three parts that he sent to his pupil as installments. In 1200, he reorganized his drafts and produced a definitive version of the treatise, which was immediately translated in Hebrew, under the title of "Moreh Nevukhim" by Samuel Ibn Tibbon, from Lunel, in southern France, (completed in 1204). Iberian poet and translator, Judah al-Harizi (d. ca. 1230) also composed a translation of the "Guide" --the latter was the model for the Spanish translation of 1419. There were latin translations of the work during the 13th century, and the work was known and studied in some universities. 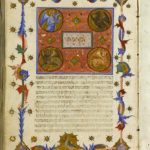 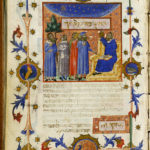 We will be focusing on Mai­monides’s ded­i­cation and intro­duction to his own work (until page 65 of the sug­gested edition). The ded­i­cation estab­lishes the main reason and the con­di­tions of pos­si­bility of the work itself, while the intro­duction lays out the main con­cepts that will establish heuristic and hermeneu­tical rules, as well as the pos­sible dis­tri­b­ution and under­standing of the work itself. The edition I am attaching is the fol­lowing one:

You can also consult the fol­lowing English trans­lation, with a rich intro­duction and notes:

Pedro de Toledo pro­duced a Spanish trans­lation of the text in the fif­teenth century, in 1419 (parts 1 and 2, trans­lated in Zafra) and 1432 (part 3, trans­lated in Sevilla), for the library and studium of Gómez Suárez de Figueroa, Lord of Zafra. It’s extant in one single man­u­script now held at the Bib­lioteca Nacional de España, Madrid (MSS/10289). Have a look at the first pages of the man­u­script and the tran­scription. We will pay some attention to that during the seminar. I gave an idea about this text in my article “La pro­ducción del margen” (also attached as a pdf).