The image of Moriscos in Iberia (1492–1614)
Issue 02 — Fall 2019 — Session 03 — Iberia, Mul­ti­cul­tur­alisms, and Mar­ginal Writing
By Borja Franco | Published on October 7, 2019
In 1609, more than a century after the forced conversion (1501) of Iberian Muslims (“Moriscos”) and following a difficult and ultimately failed process of assimilation through coercion and persecution, the Spanish crown issued the Edicts of Expulsion of this minority. Various evangelization campaigns had unsuccessfully attempted to acculturate them into the Iberian Catholic mainstream. Eventually, ever-growing suspicion of the Moriscos’ true religious and political loyalties triumphed over acceptance. 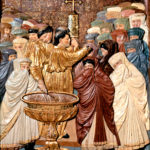 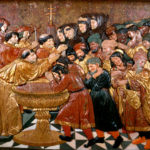 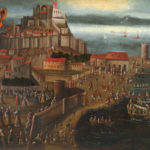 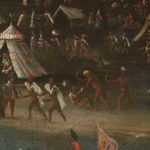 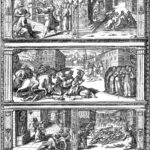 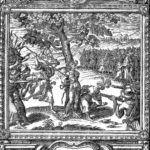 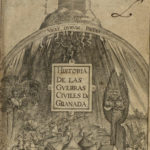 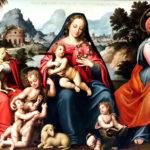 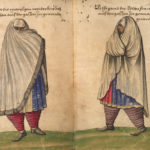 My research project begins with a question: is it pos­sible to visually rep­resent reli­gious con­version? More specif­i­cally, was it fea­sible to depict the con­version of the Moriscos in early modern Spain? To date, there has been no attempt to study how artists dealt with the problem of rep­re­senting the con­verso pop­u­lation and making it visible.

In my work, I start from the premise that neither ethnic appearance nor costume allow us to accu­rately identify these figures. I therefore begin to untangle the problem by ana­lyzing the thorny issue of the ethnic rep­re­sen­tation of Moriscos in painting, prints, drawings, and sculpture. Scholars like Vincent (1985), Fuchs (2002–9), or Feros (2017) have shown that Moriscos were described in legal and lit­erary sources as either dark or white skinned to justify the sim­i­larity between old and new Chris­tians. More specif­i­cally, our most recent pub­li­cation (Franco­­–Díaz del Campo, 2019) shows, using census data from the years fol­lowing the War of the Alpu­jarras, that the number of dark-skinned Moriscos was only slightly higher than that of light-skinned ones as a result of years of coex­is­tence with Old Chris­tians. It is therefore easy to under­stand why dif­ferent texts dating from the time of the expulsion state that Moriscos were indis­tin­guishable from the rest of the population.

On the other hand, Spanish sources also suggest a con­spicuous hybridization of customs between these groups, including attire. For instance, “dressing as a Moor” was not nec­es­sarily a token of reli­gious alterity but could in fact be a sign of luxury (Irigoyen 2017). Such ambi­guity renders the task of visu­al­izing the Morisco even more difficult.

Approaching the con­verso through the lens of dif­ference is a fun­da­mental mistake because it dis­torts complex and diverse real­ities. My research addresses a number of ques­tions that have not been ade­quately answered: What kind of image was in the mind of an artist who created pic­torial cycles showing Moriscos? To what extent were artists depicting the reality of that minority, or was their aim simply to con­tribute to the social con­struct to which the Morisco was subject?

I propose five ways to pursue these questions:

Briefly, my research sug­gests an approach to the study of visual rep­re­sen­ta­tions of Moriscos, ranging from those images that were used to stig­matize the group or justify their expulsion, to those that broadcast a moral message about their duty to be true Chris­tians, whilst at the same time con­cealing their identity.

The aim of this research is to give a voice to these works of art, not as mere visual depic­tions of a text, but as con­stituent ele­ments of a society that expressed its anx­i­eties through them. My dis­course springs from the need to rethink the way our past has been studied so far and, in par­ticular, to reflect on how a stereo­typed imagery of Christian con­verts from Islam was created which did not always agree with reality. Works of art should be seen as sources to be studied in par­allel with — rather than super­im­posed over — textual sources, be they of a lit­erary or legal nature. Only when all the pieces in the puzzle are in place, we shall be able to “see” the Moriscos in a dif­ferent light and to under­stand the ways in which this col­lective was imagined and used, some­times for political pur­poses. Only then shall we be closer to under­standing the dif­ference between the “real” and the “made-up” Morisco, whatever the reasons behind its creation.